The 80’s were all about robots.  From The Transformers and Go-Bots to Robocop, Terminator, R.O.B. and even Johnny 5, Americans seemed like they could not get enough of robotic machines!  When getting into toys of the past, most people my age would say they grew up playing with robot figures like Transformers, Go-Bots, Voltron and a few would even say Robotix.  The last one on this list is what we will be looking at for today’s quick update.

Robotix started out as a toy in 1984 from Milton Bradley that was considered a more grown up version of Legos, K’Nex and Lincoln Logs. The premise of the toy was to connect the pieces together and build robot fighters or even vehicles and make them come to life with tiny battery-operated motors and bands. I never owned any of the figures and only remember them being at garage sales in my youth. Kids at school would only talk about them every once in a while, and they never were a huge hit in my circle of friends. When I grew up I knew of a few friends who liked them in their youth like Jeremy Hoyt (even making it to his Top 5 Should Have Been List) and David Getz. Milton Bradley stopped making the toys in 1994, and that same year Learning Curve started making them and did so until 2001. Website Robotics And Things now sells parts and new additions for all versions of the toys.  It’s the modern way to update your collection.

In 1986, six minute cartoons based on the toys aired on what was called “Super Sunday,” a syndicated cartoon showcase that also included such cartoons as Jem, Inhumanoids and Bigfoot and the Muscle Machines. While Jem and Inhumanoids went onto full series and cult status, Robotix and Bigfoot fell into the wasteland of forgotten cartoons, well kind of.  All the episodes for each were put together to make animated “movies” and were released to the home video market. The plot of the short lived cartoon is somewhat the same as the plot of our Marvel Comic run so I won’t go into it. Over all I am sure I must have seen a few episodes of this cartoon, but they didn’t leave an impression because I barely remember anything about it. I should also say that Marvel helped make the cartoon and was also producer of Super Sunday.

While Robotix never made an impact on my childhood, one food mascot did, He helped me during a very big change in my young life, and that mascot was Mr. O of SpaghettiO’s fame. When I was younger I loved SpaghettiO’s and would always jump at the chance to eat them.  So when they offered a puppet of their mascot Mr. O with upc codes, I was lucky enough to send away for him and get him in the mail. For kindergarten, I went to Beavertown Elementary and had a good amount of friends and even started 1st grade there, but when my parents decide to move to Waynesville, I was nervous to have to start over and meet new kids who didn’t know me. My brother Bryan and Mr. O were my only friends for a few weeks as no other kids really wanted to talk to me. One day in school we had to do a show and tell about something you owned that meant something to you, and I decided to bring Mr. O, and to my shock and joy he was a hit.  Kids in my class all remarked how cool he was and this sparked kids talking to me and many of the playground talks/play time with all types of toys. Through the ages Mr. O has been with me and still remains one of my oldest and dearest friends.  Below is a modern pic of the two of us standing in front of my wall of Horror Host shows on DVD. I must also mention that I liked SpaghettiO’s with meatballs and also loved when they gave away Monsters in My Pocket. 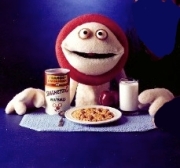 Oh yeah, Franco-American the company who makes SpaghettiO’s decided to get rid of Mr. O as the mascot sometime around the mid to late 80’s and later replaced him with a SpaghettiO ring with eyes who is being used still to this day.  But what’s not being used is the smiling face on the cans (see above). It’s a shame modern kids who eat this caned pasta meal will never know the icon of my childhood, Mr. O. Companies should come to realize we consumers love mascots and hate change.

So let’s get into Marvel’s Robotix comic run that lasted a total of…..1 issue! Yeah, it got the old Sherlock Holmes DC treatment, and the plug was pulled after just one outing. I am guessing while the toys were selling pretty well, the cartoon was a bomb and this is why Marvel decided against giving this a series or even a mini series. The most puzzling part about this comic is that it came out via the Marvel brand and not the Star brand that was more geared toward toys and cartoon tie-ins, but even if it came out via Star I only see Robotix getting 3 issues max before it fell to the wayside. Just a reminder once again, I grade these on a standard 1-4 star rating and am looking at how well the comic keeps to the source material, its entertainment value, its art and story. So let’s get into the world of the Robotix!

The spaceship Daniel Boone, with its crew lead by Captain Galaxon, has been shot down over a planet that leaves them stranded, and to make things worse, they stumble onto giant Robots that are at war with one another. The good guys are called The Protectons, lead by Argus, and the evil robots are The Terrokors, lead by Nemesis.  After a quick fight, the baddies flee to the hills. Galaxon and his men speak with Argus and his friends who want to be on good terms with the humans and want to help fix their ship so that they can leave the planet safely. Kanawk and a few of the men don’t trust the robots and are questioning the leadership of Galaxon.  Sides are starting to separate the humans, as at their camp they argue whether they can trust the robots.  The humans are attacked by The Terrokors and are once more saved by Argus, and this builds the trust between humans and robots. But as Argus shares his peoples secrets of being an alien race whose spirits are stuck in these robots, Kanawk, a human who hates the rules of Galaxon, takes what he knows and joins forces with Nemesis.  A war between both sides are set and pits both man and machine against each other for a battle to rule the planet and escape the world.

This is a good solid sci-fi style story and reminds me a lot of Transformers, but instead of the robots coming to us, this story has the humans going to the robots! Captain Galaxon is a pretty good hero and has a dash of Duke from G.I. Joe and even a little Flash Gordon thrown in.  He is noble and has the safety of his crew as his top priority. The Robotix leader is Argus and is the robot version of Galaxon wanting to help the humans and save them from a death at the hands of the evil robots. Human Kanawk is just an ass who is the type of guy who just pushes buttons and ruffles feathers just to stir things up.  He also acts as if he knows more than anyone else and is clearly a bad guy from the start. Robotix Nemesis is pure 80’s bad guy, who, while super evil, can’t win a battle if his life depended on it! The idea that the Robotix are alien spirits stuck in the bodies of giant machines who are really looking for a way to turn back into their normal bodies is really interesting and gives them a little more spirt and more soul than Transformers or Go-Bots.  But sadly they’re still not as cool as either. The comic’s pacing is very slow, and I could see how it would lose many young readers’ attentions as they just were wanting to see robots at war but instead got some battles mixed in between the drama of the humans fighting for control of their trust and plans. But while the robot fights are fast and not done 100% right, they still are fun moments when they are shown. Not having any connection to this toy line, the comic didn’t help me build a connection to any of the characters, and while I found them good, I still didn’t find them as iconic as many other characters from these type of comics based on toys. Over all I would say this is an average comic book that has good art and a cool cover, and I am sure made fans of the toys happy and entertained those who read it that had no connection to the source material at all.

This only lasted one issue and even at the end of the comic it seemed like no other issues were planned, making me truly think it was a one shot deal between Milton Bradley and Marvel and that this was a way to try and make Robotix cool to kids and the young at heart. The most puzzling thing about it has to be that it came out via Marvel and not Star who was going strong at this point. I think this was a missed opportunity and could have been made into a mini series and would have had them going alongside Thundercats, Care Bears and more giving the characters a chance to be fleshed out and build up a bond with kids who would have been buying the toys much like the cartoon tried to do. While Robotix seem to have been a big deal to a few kids of the time, the circle of friends I had never even spoke a peep of collecting them, and this is one of those toy series as well as cartoon and comic that will be remembered by a few but forgotten about by many. With Christmas being this month, I think form here on I will have some fun and light hearted updates that will end with a Star comic series based on a toy line that was a popular gift at the Brassfield family holiday gatherings! I want all you friends and readers to think about that one. But first we will take a walk in a magical place filled with talking trees and hamburgers that grow like weeds, McDonald Land…so see you next update for a greasy good time.