Welcome back to Rotten Ink and for this 10 Year Anniversary update and for this update I figured why not vist the Sunday Funnies and take a look at a comic strip that I loved as a kid that also spawned a cartoon series that was must watch TV for me and better yet it was created by Jim Davis the mastermind behind Garfield and I am of course talking about U.S. Acres the fun farm set and animal led strip that was all the rage for a very short amount of time. And you guys know me I have a soft spot for the old comic strips of my youth as well as even discovering new ones so one of these updates had to be featured. So grab a glass of milk, coffee or orange juice sit at the place you eat breakfast and lets dive into the world of U.S. Acres and see what Orson Pig and his friends have in store for us!

U.S. Acres was a comic strip created by Jim Davis the man behind the Garfield strip and was set on a farm that featured talking animals and their times living on the farm as well as dealing with each others zany personalities. The Comic strip started in 1986 and would run in Newspapers all over North America and was a hit with young kids as well as adults would get a chuckle from its silly humor. Jim Davis would work on the strip with his assistant Brett Koth who was also helping on the Garfield strip at the time. The cast of characters include strip star Orson Pig a good natured Pig who was the leader of the barnyard, Booker was a small chick who was saved as an egg and hatched and cared for by Orson who Booker calls Mom, he has a little attitude but is a good kid. Sheldon is bookers brother and has the same back story of being found and saved by Orson, he however is still stuck in his shell and is super smart. Bo and Lanolin are brother and sister sheep with Bo being nice and Lanolin being a mean loudmouth. Wade Duck is a duck who is scared of water and wears a pool inner tube around the farm, is one of Orson’s friends. Cody is the farms puppy and Blue is the farms kitten. Filbert is a worm who has a family with wife Estelle and son Willy. And lastly is Roy Rooster who is a joker and is kind of the series bad guy as he lives pranks and teasing, but also is a friend to them all. The comic strip was so popular that it would spawn merchandise as well as a cartoon (but more on them a little latter) and would run until 1988. The strip would make a comeback as a WebComic in 2010 and in 2019 Viacom would buy Paws, Inc. from Jim Davis and they would now own Garfield and U.S. Acres and the comic strip would end again in 2020. Now in the hands of Nickelodeon the fate of U.S. Acres is unknown at this time, and lets all hope the strip makes a comeback.

Garfield And Friends was an animated show that aired on CBS for Saturday Morning Cartoons and started on September 17, 1988 and would run for seven seasons with 121 episodes made and the show would end in 1994. The show was 30 minute episodes (later two back to back episodes) and would feature segments of Garfield as well as U.S. Acres and would be a super popular cartoon that was must see TV and one that I can remember watching as a kid as well as talking with my friends at school about. And this is the case of all segments being good and both the Garfield and U.S. Acres being on equal ground, even if Garfield was the main star of the cartoon. Garfield And Friends was must see Saturday Morning Cartoons TV as it was super popular and was even as popular when reran after the shows run came to an end. Episodes of the show was released on VHS and later the whole series was released via DVD volumes, and these sadly are out of print and are going for high prices. But fear not the first three seasons of the show have been released again and are budget priced. If you grew up when this showed aired or discovered it on home media decades later you know how much fun this cartoon was and is one that showed be viewed still to this day.

Besides reprints of the comic strip U.S. Acres would get a good amount of other merchandise for fans that would include kids story books, key chains, stickers, posters, shirts and plush dolls. Its crazy to think that U.S. Acres is not as well knows as Garfield and that the merchandise is way harder to find then Garfield’s as I feel that both are amazing comic strips and should get more love then they do in the modern times. As a kid I had many of the paperback books as well as a keychain of Orson Pig. I would love to get some of the plush dolls now and have them in my classic toy collection. But if you are a fan of U.S. Acres there is lots of cool stuff for you to collect.

So as you can see U.S. Acres was a big part of my childhood and even still to this day I love these characters and the world that Jim Davis created for them. Plus I mean fans of Garfield should also enjoy this comic strip as they are set in the same universe. But we are now at the time for the review for this update and I first want to thank the Etsy and Amazon sellers for having this book in stock and allowing me to read these again, as book 6 is the one Paperback version that I remember owning as a kid! I want to also remind you readers that I grade these comics on a star scale of 1 to 4 and am looking for how well the comics stay to the source material, it’s entertainment value and it’s art and story. So if you are ready lets take a stroll around U.S. Acres and see what Orson and his friends have in store for us. 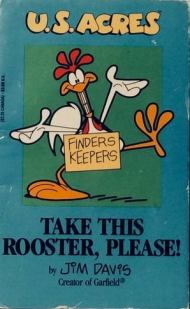 This book is tons of one-page stories of the U.S. Acres crew having silly and loveable adventures! So while I cannot cover each one I will select 10 of my favorite strips in no real order. First: Roy Roster is on the barn roof and is mad when the weathervane that looks like a rooster will not talk to him, making Roy thinks that the other rooster is snubbing him. Second: Orson Pig uses earplugs so that Roy Rooster cannot wake him with his early morning call, but Roy has another way of waking up Orson as he pours a bucket of water on him. Third: Orson Pig is making a garden with Booker and Sheldon, and when he calls for the seeds to planet we see a big belled Booker passed out with a empty big box that reads seeds. Fourth: Sheldon is looking at himself in a trick mirror and he gets worried when he sees that he no longer looks like an egg but a peanut. Fifth: Orson, Roy, Booker and Sheldon sneak into the Farmers home to borrow some Christmas ornaments for their barnyard tree and they find Sheldon in the refrigerator kicking out eggs saying he is setting them free. Sixth: Sheldon and Booker try and stay awake Christmas Eve so they can see Santa Claus, but when they fall asleep Santa ends up putting them to bed and tucking them in. Seventh: Sheldon is wearing an Elvis wig and big lift shoes and has Orson write a thank you letter to Santa, as well as ask for help on how to walk in the massive heeled shoes! Eighth: Cody Dog is walking around with feathers in his mouth and Orson asks him why, and he says he ate Roy but before he can finish that he at his Pillow Orson freaks out and runs around screaming that Cody ate Roy! Ninth: It’s bedtime and Orson heads to brush his teeth when he tries his toothbrush bounces all over, he is supper mad, as someone has slipped him a rubber toothbrush. Tenth: Booker and Sheldon have made a small snowman when Roy runs by and kicks it, so the brother make another bigger one and as Roy runs over to kick it he smashes into a tree as the brother built it around one to teach the rude Rooster a lesson.

This Paperback Book that reprinted some of the classic comic strips is a great read and an amazing flashback for me as it made me remember just how much I loved these characters as a kid. This book does a great job of giving every character a time to shine and have some funny moments. The only one that I feel is a little left out is Wade Duck who has less panel time then the rest. I do like that they also give a little attention to side characters like Blue The Kitten and Cody The Puppy as for most of the time they are the characters that seem to be forgotten and are not aloud to shine as brightly as the main cast, but here they are given respect and time to bring some chuckles. Orson of course gets lots of the pages dedicated to his zany life as does Booker and Sheldon and they are clearly the comic strips main stars and are some of the most loved characters. Roy Rooster who is my favorite gets some great gags in this book and his terrible jerky rude attitude is in full effect as he is mean and yet also friendly too much of the cast! The cover is great and eye catching and is the one I remember the most as a kid, with the interior art by Jim Davis being topnotch comic strip stuff. Over all if you love U.S. Acres like I do get this Paperback Book and enjoy the flashback of barnyard humor. Check out the artwork bellow to see the style used in this book as well as almost all of the characters. 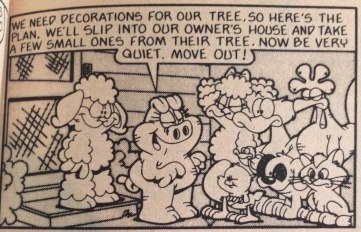 I love Comic Strips and it’s a shame that they are not as big as they once were and that modern day kids will not understand the excitement of Sunday Mornings rushing to read the Funnie Pages as well as look at the Toy Ads from your favorite department store all the while eating breakfast. And its sad also that this generation of Kids who do love comic strips will not get to enjoy U.S. Acres and if they do they will have to find the strips online or track down one of these books that tend to be a little pricy, but its worth it if you like light hearted humor of comic strips and Davis. But as you can see we are at the end of this Funnie Page update and for our next one we will be heading to the world of Lucha Libre to take a look at the first in the “Indie Luchador Files” series and I promise it will be a fun one! So until next time read a comic or three, watch a film or two and as always support your local Horror Host. See you next update at the Rotten Ink Arena!