Horror Hosts have always been an important part of Dayton, Ohio culture with Channel 22 bringing Shock Theatre with host Dr. Creep to viewers starting back in 1972 and many amazing hosts followed in the good Dr.’s footsteps like A. Ghastlee Ghoul, The Creeper, Baron Von Porkchop, Iris & Retina, Rayne and Dr. Freak to name a few and all made impacts with viewers. But one host here in Dayton never reached a cult statues with viewers and faded away into obscurity with very few ever speaking his name and I am talking about Commandant Gore and his show Gorevision that haunted airwaves on MVCC Public Access here in Dayton. With this I have searched the VHS vaults and trade lists high and low to bring you this Horror Host Icon(?) update based on the one and only bringer of the gore, the master of splatter, the duke of mayhem Commandant Gore. I should also note that this update will be a fast one as there is not much to say and or information about this show and host out in the world. On a side note due to some timing issues Juliet’s look at Horror Host Stella Desire has been pushed to a later date. 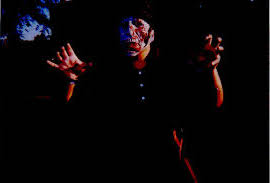 Commandant Gore is a shape shifting dead nazi who is upset with the living and is seeking vengeance and revenge on the them and he figures what better way to get what he seeks then to host classic horror movies as well as showcase death metal bands from the area on a public access show! He would host the show via the studios of MVCC as well as in the basement of an apartment complex from the Kettering, Ohio area. The Commandant was not a fun joking kind of host and hosted with a snarl and a sinister tone. He also really liked the gore and violence from the movies and embraced all things evil. His appearance would change from episode to episode as would his body size making viewers wonder just what the Commandant was up to as sometimes he would look like a zombie while others he would have grease paint smeared on his face. The show Commandant Gore hosted was called Gorevision and started in 2000 on Centerville, Ohio public access station MVCC and only lasted a handful of episodes before the show faded away and was not even shown in reruns, and this happened around 2003-2004. In 2005 Commandant Gore tried to bring the show to the Internet, but that never happened and that marked the final end to the show. The show did become the subject of lots of public access urban legend as to why MVCC pulled the plug on the show and booted it from air with some claiming it was because some of the subject matter they showed while others talk about how by accident they put peanut butter in one of the editing machines causing hundreds of dollars in damages and that was the nail in the shows coffin! Even word is that all the master copies of the show have been destroyed and that Gorevision can only be found in the collections of diehard Dayton Horror Host collectors as well as those who were apart of the Horror Host Underground who might have gotten the episodes to play on other Access stations. While Commandant Gore might not be a household name I am sure some fans remember his show and enjoyed his bloody antics. I should also note that many people including Rick Ammon as well as many of his friends played Commandant Gore, and he as well made a small amount of public appearances mostly at Cinema Wasteland Convention as seen below in this pictures, he is the one behind A. Ghastlee Ghoul in the first two and is almost cut off in the third. 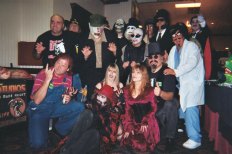 Growing up I watched lots of shows on MVCC with host shows like The Ghastlee Movie Show, Moraine Playhouse Theater, Cult Theater and New Shock Theater being must watches! Not to mention oddball shows like Eat More Carp, Media Only and Neon Maddness were enjoyed as were music shows like Metalmania and Zoo World. And yes I do remember when Gorevision hit the airwaves and while I enjoyed seeing movies like the Blind Dead I was never a mega fan of the show and didn’t watch that often. While I have always been a huge fan of Horror Host shows Gorevision for me was just lost in the sea of other Dayton area hosts who brought shows and antics that I found to be way more enjoyable. Plus I had always found the show to slightly lack focus when it came to presenting the host Commandant Gore as he needed to be the main attraction of the show and not random title cards and local metal bands. But while I might not have been a fan I can still give credit that Commandant Gore and his Gorevision is apart of Dayton, Ohio Horror Host history.

Gorevision also spawned other Horror Hosts or should I say Horror Host personalities who claimed the mantel of being a host and yet never produced or made a show in the case of one! As these hosts were Dr. Horrific and even a Dr. Creep Jr. emerged after the disbanding of Commandant Gore’s short time on TV. I have only heard rumors of Dr. Horrific having a show or two and I had heard zero of Dr. Creep Jr. ever having one. So I don’t want to spend too much time on these two as they have no legacy of Hosting on TV, but I do sadly want to say that Jeff Ammon who played Dr. Horrific passed away in 2020 and Lonnie Ray Lynch who played Dr. Creep Jr. passed away in 2014. And I do make this promise if any episodes of either of these “Hosts” are found I will give them the honor of having a full Horror Host Icon update, as I have always said all Hosts mean something to their viewers and no Host is two big or small to be given these update respect. 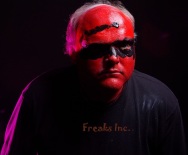 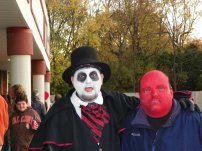 Gorevision and Commandant Gore was very much a more underground Horror Host here in Dayton and with that comes episodes that are hard to find and if not for the likes of A. Ghastlee Ghoul and the late great Andy Copp this update would have not been possible as they both had episodes to share. I want to remind you that I will be taking the movies plot write up from our friends at IMDB and will myself write the breakdowns of the Host segments. So if you are ready put on your glasses as its time to see the world in Gorevision! 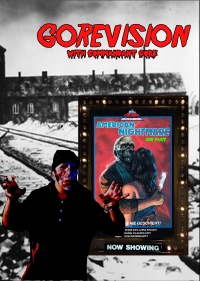 Host: Commandant Gore does not make an appearance in this episode and we start the show with a few songs from a local metal band.

Movie: A man investigates the disappearance of his sister with the help of her roommate. He uncovers a trail of prostitution, incest, blackmail…and murder.

Note From Matt: This episode has the second part and final part of the 1983 film American Nightmare. 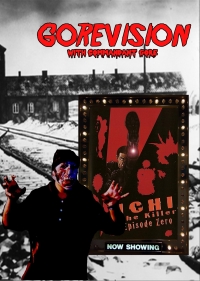 Host: A Title Screen off center welcomes the viewers to Gorevision, and no appearance from the shows host or characters.

Movie: A masochistic mobster meets his match in the dark streets of Tokyo. His nemesis, Ichi, is a psychopathic killer with an unrelenting thirst for bloodshed. A horrifying secret burns in his mind, and his hands deal death without mercy. At last, the shrouds of mystery are parted to reveal the origin of the monster. The city will know its greatest fear at the unveiling of Ichi the Killer.

Note From Matt: This episode is very poorly put together and is Episode 3 from them. And I think they forgot that the Host is what makes an iconic Horror Host show and that he needs to appear in your episodes! 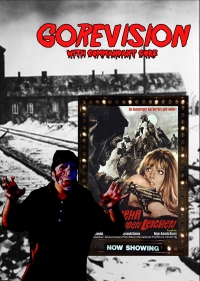 Host: Commandant Gore opens the show sitting in the studio with red and black grease paint smeared all over his face. He informs us this is another of the looks he takes on and talks about the nights film and then ushers us in to it.

Movie: 500 years after they were blinded and executed for committing human sacrifices, a band of Templar knights returns from the grave to terrorize a rural Portuguese village during it’s centennial celebration. Being blind, the Templars find their victims through sound, usually the screams of their victims. Taking refuge in a deserted cathedral, a small group of people must find a way to escape from the creatures.

Note From Matt: The movie has bad audio at the start of the film and has a hiss throughout. 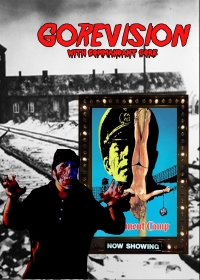 Host: The only Host segment for this episode is a title card of center that says the night’s movie is presented in “Gorevision Sytle”.

Movie: Near the end of WW2, prisoners of war are used in experiments to perfect the “Aryan” race.

Commandant Gore is one of those hosts that I think had potential of being a creepy host if only he had direction and scripts. They should have kept the same actor in the role and showcased him more in the episodes, as there is no reason why he should not be seen in every episode and he should be shown more than once per episode when he did appear. Over all while he was not the cream of the crop when it comes to Dayton, Ohio Horror Hosts, he still has his place in the area’s history and as I said before I am sure he had his fans. And here at Rotten Ink I made a promise to myself to cover any and all Dayton, Ohio Horror Host from the past and present and I am sure many of you are learning about Commandant Gore for the first time! For my next update we will be walking away from the world of Horror Hosting and will be heading to the world of Forgotten Heroes as we will be taking a look at Tiger Girl from Gold Key Comics! So until next time, read a Horror Comic or three, watch a Horror Movie of two and as always support your local Horror Host! Say do you think Gold Key Comics Tiger Girl is related to Atlas Comics Tiger-Man?