Hey friends and readers! As you can see I am a little behind here at Rotten Ink as I have moved!! That’s right I have a new home base and sadly my comic collection is all over the place.  This has made it impossible for me to find the comics I need! So I’m sad to say that The Mummy has been put on the back burner until I can find it, and to hold you over, I will use a fill in update.  So sit back and enjoy this write up I did a few years back. I should note that this was to start off a update series called Made For TV that would have had me talking about all the movies made for the small screen I grew up watching, so sit back and enjoy this “lost” update as I have more unpacking to do!

Welcome back fellow Comic readers.  For this update, I decided to take a break from the ink filled comic pages and instead took a look at a made for TV reunion special. In 1977, NBC decided that after 9 years off the air, the world needed a Halloween special with The Addams Family! This special, simply named “Halloween With The New Addams Family,” would act as a reunion for the cast as all but one original cast member stepped back into their cooky outfits and hammed it up for the viewers. The only original actor not to appear was Blossom Rock, who played Grandmama, as she has very ill at the time so actress Jane Rose stepped in to fill the role. I first saw this special on a VHS that was put out via Goodtimes Video that I bought for cheap from the secondhand store called Replay Media.  After the first watch, I was not super impressed but did enjoy the over all silly nature. In 2014, I decided to watch this special again and while it has never made it to DVD, I was able to get a copy on DVD-R to watch again and bring you this update that I am calling “Made For TV: Halloween With The New Addams Family”, so sit back and enjoy this look at a true gem of television.

The first really cool thing that one will notice when finding this special on VHS or DVD-R is the fact that the cast from the classic spooky TV show is back, and while older, most of them don’t seem to miss a beat. John Astin plays Gomez Addams and is still terrific in the role as he does all his classic faces from when he’s sad to when his wife speaks French to him and his eyes bug out.  Astin is one of my favorite TV actors and truly doesn’t miss a step in the ’77 special proving he was born to play this part! Carolyn Jones plays Morticia Addams and is also terrific in her performance and is as deadpan and sexy as ever. Between her, Yvonne De Carlo (Lily Munster) and Elvira Mistress of the Dark, they are the reason I grew up loving Goth girls. While it’s clear she is older in this special, she still holds that magnetic charm and appeal not only with her appearance but also with her acting. Jackie Coogan returns as Uncle Fester, and while great in what he does, to me it seems as if his character takes a backseat and is not given anything to make him the stand out character he truly is. Ted Cassidy rocks it once more as the butler Lurch and like the rest thus far doesn’t miss a step in his performance and delivers all the deep voiced grunts and lines fans would want to hear. Felix Silla returns as Cousin Itt and is what you would expect from a character that doesn’t talk and his sounds are added in after it filming. Lisa Loring plays Wednesday Addams again, and she does a great job and hams up her performance making it feel like your watching an episode of the Banana Splits.  I must say she grew up to be a very pretty young lady. Ken Weatherwax plays Pugsley Addams, and while it was nice to see him in the role again, he was not a very good actor in this special, and it almost seems like he knows he’s being too cheesy by the smiles on his face. The rest of the cast as new to the legacy of The Addams Family so I will rush through them as this is the only thing they did for this series: Henry Darrow plays Pancho Addams who is the younger brother to Gomez and is really good and his performance is a more sleazy version of Astin’s Gomez. Jane Rose takes over the role of Grandmama and while she tries, she just ain’t no Blossom Rock, as she seems to be missing something that makes her the lovable creepy character from the show. The rest of the cast all do a great job and all add the right amount of silly and hammy to their performances. 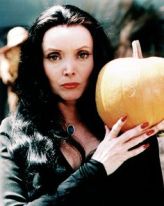 Made for TV Movies that acted as reunions for shows were not uncommon and many shows did this such as The Brady Bunch, Saved By The Bell, The Incredible Hulk and Dukes of Hazzard, to name a few. Many times they were made for cheap and to cash in on the remaining fan base who wanted to catch up with their favorite characters, while other times they acted as a way to pitch a return series to see if a fan base was still willing to watch a show’s return to TV. The TV Reunion movie had been a thing of the past when I first rewatched this special, but recently, we’re seeing TV reunions in the form of special event seasons of shows like Gilmore Girls, The X-Files, and very excitingly just announced, Roseanne. Below I am going to talk about the plot of this special and then after that my thoughts on it.  So let’s turn on the boob tube and enjoy this 1977 flashback.

The Addams Family is having a Halloween Party for family only, but Gomez has to leave town in order to become a higher-ranking member of his club. But in town is Pancho, his brother who has a crush on Morticia and is trying to take over the Addams home! Also around at the Addams Mansion are Wednesday Junior and Pugsley Junior younger kids of the Addams, Uncle Fester, Thing, Lurch and Grandmama all helping out to get the party just right for the family reunion Halloween party. Meanwhile a gang of thugs have the mansion bugged and want to steal the family fortune while Gomez is away, even going so far as to send one of their own into the Addams home to get a look around acting as an inspector. This con man watches as Wednesday and Pugsley return home, each with new careers as Pugsley is now a Witch Doctor and Wednesday studies and plays music.  He also watches as the spirits of the deceased members of the family make noises from their graves, their pet lion attacks him for stepping on it’s tail and even is attacked by a plant! The con man escapes and returns to home base ranting out of his mind and quits the team, but this does not stop the others from going through with their plan to steal the fortune.

This special was clearly made to try and help usher in a New Addams Family TV series, but I think by 1977 and making it in color some of the charm of what the series was about, poking fun at society and classic cheesy black and white horror films of that time, was lost. But with this said, this made for TV special also has a lot of charm and captures the feel of late 70’s programs with the laugh track that seems like it was taken from Scooby-Doo cartoons to all the lame and dated jokes. I loved the updated sets with the cemetery backyard being really cool as is the new and improved mansion. One thing that makes this movie interesting as well is the fact they added two new kids to the family and named them Wednesday Junior and Pugsley Junior showing that if a new series was to be made they would still capture the kid characters with these two new brats, and the original kids would be reduced to cameos from time to time. Speaking of the older kids, I must say that Lisa Loring as the grown up Wednesday was stunning and in one scene she is dressed as a tennis player for Halloween and she is very attractive, plus it weird cause they have her playing a piccolo a lot in this film and at times it almost comes off sexual, but I was A-Ok with it. What made this cheesy made for TV film work is seeing all the classic characters together again on the screen.  I mean Lurch, Thing, Uncle Fester and all the other Addams clan have always felt like family to those who grew up watching them during first run or even reruns and while this reunion movie is flawed and not perfect, it’s still an amazing watch that offers lots of entertainment for fans who just love the Addams Family. So if you get the chance and find this on VHS, DVD-R or if a TV Station ever decides to play it again make sure to give it a watch as its filled with laughs, eye rolling moments and a classic 70’s feel.

Halloween With The New Addams Family is a forgotten gem of films made for TV and is one that’s mostly over looked in the history of chatting with friends about The Addams Family. So what I would like right now is for all you readers and friends to take a moment and let me know in the comments below if you remember watching this film? What were your memories and thoughts about it? How did you enjoy seeing the characters back? So go on and don’t be shy. Leave a comment below and share with me about Halloween With The New Addams Family! 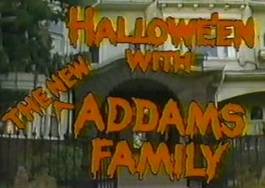 We will be leaving the world of Made For TV Movies and moving away from The Addams Family.  Next we’re taking a look at the world of Horror Comics and my love for them as I revisit a comic series called Body Count that was released by Aircel at the start of the late 80’s. So I hope you had a great time with this update, and who knows, maybe I will do another update in the Made For TV series. So until next time read a comic or two, watch some TV and as always support your local Horror Host!