For this Halloween Countdown, update we will be taking a look at the 1995 direct to video horror movie Night Of The Scarecrow! Back in the 90’s video rental stores were still king of movie viewing with streaming services not even around yet, and it was an event to go to the video store and look at the shelves to find the right movie or movies to provide entertainment for the weekend. This was a major part of my late teen years, and during this time I was able to watch many great direct-to-video horror movies and Night Of The Scarecrow was one of them! So let’s take a look at this From Horror Movie To Horror Comic update all about that film and its promo comic. 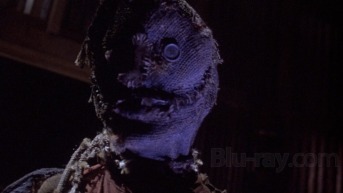 Before we dive too deeply into Night Of The Scarecrow, we should first talk about its killer, the sinister Warlock who has many ways to dispose of human lives! The Warlock Scarecrow is very sinister in appearance and also uses his creepy voice to startle and scare those he has targeted to be his victims making it very easy for him to attack. He also has supernatural powers that allow him to control some farming machines and parts of nature and can do so to help capture and kill anyone stupid enough to get in his way. He can also use illusions to lure people into his traps as well as morph from place to place making him very cunning and deadly. When those dark magic tricks fail, he also uses brute force to kill his enemies by bare hands or sharp weapons, as his main goal is to kill and cause terror on the path for revenge. He can also implant seeds into females and cause them to explode open with killer vines coming out of the wounds dealing out pain and death. He also draws powers from his old Warlock book that has all his spells. And let’s not forget, he can shoot straw needles from his hands that act like mini arrows dealing pain and possible death to those unfortunate enough to have them fired upon them. Normal weapons like guns, fire and knives have zero effect of The Scarecrow, and his only weakness is damaging his bones from his human corpse. So in other words, if you destroy the bones, you destroy the Warlock Scarecrow. With only one weakness and with supernatural powers and a rage-filled attitude for death and revenge, The Warlock Scarecrow is one killer that is hard to kill and is cruel in his ways of dealing death.

So with that you can see that The Scarecrow is very deadly and evil and is one supernatural killer you should not mess with. So now that we broke him down, let’s take a look at the film that spawned him. I would like to remind you that I will be taking the film’s plot from our pals at IMDB and then I will write about the film’s production and release as well as my first time seeing the movie.

“A group of drunk teenagers accidently set free the spirit of a warlock, which possesses a scarecrow. The scarecrow goes on a bloody rampage killing the descendents of the men who had killed the warlock a century before. A newcomer and the daughter of the mayor try to stop it before it is too late and the warlock can reincarnate.”

Night Of The Scarecrow was directed by Jeff Burr, who is known to horror fans for directing such films as Stepfather II, Leatherface: Texas Chainsaw Massacre III, Pumpkinhead II: Blood Wings, Puppet Master 4-5 and Mil Mascaras Vs. The Aztec Mummy, to name a few. The film’s cast was made up of such names as Elizabeth Barondes, John Mese and Howard Swain as The Scarecrow. The film was released on home video by Republic Pictures on August 8, 1995 and was a very typical standard direct-to-video release and got some press from the likes of Fangoria Magazine. When released in 1995, this film had stiff competition to get Horror fans’ attention alongside films like Tales From The Crypt: Demon Knight, Halloween: Curse Of Michael Myers, Castle Freak, Tales From The Hood, Leprechaun 3, Project Metalbeast, Vampire In Brooklyn, Mind Ripper, Sleepstalker, Burial Of The Rats, Godzilla vs. Destoroyah and Jack-O, to name a few. Over the years, Night of the Scarecrow has built up a cult following and finally was released on DVD and Blu-Ray in 2013.

When Night Of The Scarecrow was released on VHS, I can remember going to the video rental store K&L Video with my brother Bryan and renting it during one of our weekends of binge watching horror flicks. The owner Kenny also had a poster for the on the wall, and it was awesome looking. It was one of my picks as the cover drew me in and I have always been a sucker for a good creature slasher film. And with the sodas and chips that we bought from Dot’s Market in hand, we popped the movie into the VCR, and I enjoyed the hell out of the film! I liked the look of the Scarecrow, and much of the film’s gore effects were well done making it a very solid direct to video horror shocker. I spent some time trying to get a copy of the film on VHS for my collection and finally got it thanks to a local second hand media store, and later I would get it on DVD when it was finally released. For some reason I have always been into horror movies that have killer Scarecrows in them, and I think that it started for me with the made-for-TV movie “Dark Night Of The Scarecrow” that was released in 1981 as something about that movie always captured my attention and imagination. Also back in my youth, my Grandma Brassfield use to make a stuffed Scarecrow for Halloween to place on her swing on the front porch that she called “Mokernose” and this also became the thing of ghost stories between my brother and cousins and I as we would tell each other “What If it came alive” tales. The directing style of Jeff Burr is also really well done, and he always can make smaller budget films appear bigger by hiding limitations and highlighting the aspects that work. Howard Swain is pretty dang good as the Scarecrow, and it was great seeing the likes of Martine Beswick, Duane Whitaker and Robert Harvey in roles. Over all, if you like 90’s direct-to-video horror films, killer scarecrows, slasher flicks and evil curses, then this is a film you should check out this Halloween season.

So as you can see, this killer Scarecrow is one evil spirit who enjoys taking lives and stealing souls! I really do think this film is underrated as it’s a great film from director Jeff Burr and one that you should check out if you like films about murderous scarecrows. And now it’s time to take a look at this promo comic made about this film. I want to thank an Ebay seller for having it in stock and making this update possible. And before we get to this spooky comic review, I want to remind you readers that I grade these comics on a star scale of 1 to 4 and am looking for how well the comics stay to the source material, its entertainment value and its art and story. So if you are ready, lets head to the town of Clayton and see if we can spot and survive this night of the Scarecrow.

Clayton is a small farming town, and in this town is lifer Jed Faney whose father had told him something very bad before dying that has caused him to be drinking very heavily at the bar. Jed blows off his friend Todd and grabs a six-pack of beer and heads to the old cornfield and wants to drink with The Scarecrow who comes live and tells Jed that he has his father’s soul and now wants his! Jed runs away and drives off in his trunk as The Scarecrow follows threatening to steal his soul, and this causes Jed to wreck his truck and be killed during the wreck. As the town’s sheriff rushes to the scene of the wreck, The Scarecrow enters town and kills Todd and his drunk friends as this town has a curse that won’t end until the entire town is dead.

This promo comic does a pretty good job of getting your attention and building interest in the film as it gives you just enough to wonder why and how this killer Scarecrow has it out for the people of this small town. The plot is very simple with man who is told a secret by his father on his deathbed and decides to face the “legend” face only to become just another victim in the curse. The “hero” (if you can call him that) of this comic is Jed Faney who we first meet getting drunk in a bar and blowing off pulling pranks on high school students with his friend, only to drink and drive in his massive truck to a cornfield where he comes face to face with evil and wrecks his truck at a high speed and dies…that’s our hero. Now I get that Jed is told by his father that the whole town is on a one way path to dance with death and meet the Grim Reaper, it’s just that he really does nothing to try and warn people or even stop the killer Scarecrow…his plan of action is to drink heavily and drive drunk. The Scarecrow is pure evil and wants to collect the souls of those he kills and does not care who must die that cross his path as he just wants death and pain. The issue has some blood and deaths and does bring a slasher film style of horror to the reader, and for that the makers of this comic really did capture the mood and style of the film. The cover is great and is the poster that was used to promote the film at the video rental stores. The interior artwork is done by Leonard Kirk and is great stuff and has a real indie 90’s horror comic appeal. Over all if you like this film, direct-to-video horror movies in general or just love horror comics based on films, make sure to check this one out. Take a look at the artwork below to see Kirk’s style. 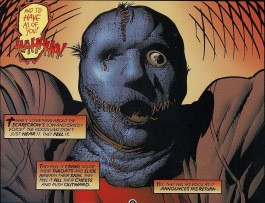 Night Of The Scarecrow from 1995 is a really entertaining film and also had a good comic book based around it. I want to thank my pal Nathan Steinke for alerting me to this comic book, as he and his brother Justin are like me and love to read and discover new horror comics as they are true comic book readers and fans. And now I am going to sound like a broken record as I take a moment to say this to filmmakers who are making horror films…why in the world are you guys not making comic books based on your films to help promote your fright flick? Really this is something that needs to come back full force from our past. Heck, movies like Giant Spider Invasion, The Willies, Sleepstalker, Godzilla vs. Megalon, Babysitter Massacre, Human vs. Zombies and so many more have comics, why not your film…think about it. Well the air is turning bone chilling as Halloween is coming up, so I think we will be next taking a look at a shot-on-video film series called SNIX that was created by James Rolfe! So until next time, read a horror comic or three, watch a horror movie or two and as always, support your local horror host! See you next time for the SNIX pack challenge.