Greetings readers – it’s Juliet, reporting back in for blogging duty. Back in the early days of Rotten Ink, 2013 to be exact, Matt asked his friends what franchises they thought should have been made into comics.  Interestingly several of my picks have become comics since then with one franchise in particular enjoying a reboot and subsequent relaunch into popular culture.  That franchise is She-Ra, and today we’ll be taking a look at both the classic Princess of Power and the modern Princesses of Power series including a modern comic for younger readers.  So saddle up your flying horse, grab the Sword of Protection and let’s head to Etheria for the honor of Greyskull!

In 1985, Filmation launched a spinoff to it’s animated series He-Man and the Masters of the Universe.  Geared at young women, She-Ra: Princess of Power followed Princess Adora, the twin sister of Prince Adam (aka He-Man), who was kidnapped by Hordak at birth and was taken to Etheria where she served as Force Captain of the Horde.  After being saved by He-Man and reunited with her family, Adora then chooses to return to Etheria as a freedom fighter in the rebellion, taking up the Sword of Protection and the mantle of She-Ra.

She-Ra: Princess of Power introduced many supporting characters, some of whom were created by Filmation and others by Mattel, presumably so they could add toys and other merchandise featuring the new characters. The series made its debut on TV in 1985, and the five episode introduction was packed as the film He-Man and She-Ra: The Secret of the Sword. She-Ra: Princess of Power would run for two seasons and a total of 93 episodes.

The original She-Ra series is one of those cartoons that’s just always existed for me.  I was so young when it debuted, that I can’t actually remember the first time I saw the show, rather, it was ever-present throughout my childhood.  Even after it went off the air, I had a VHS copy of He-Man & She-Ra: A Christmas Special taped off TV that I’d regularly watch.  I loved the characters, but moreover, I loved the idea of the characters and their world.  These were the types of characters that I’d make my own stories about while daydreaming (hello, future fanfiction and original fiction writer). Like many cartoons of its era, it faded away for a while but saw a huge resurgence of interest with the rise of nostalgic pop culture in the late 90s/early 00s.  And of course, the release of the show on DVD helped fuel that fire.  I have the DVDs, and it’s been fun getting reacquainted with the series, especially getting the watch the entire run in order, something I didn’t get to do as a child.

In 2018, a new version of She-Ra debuted on Netflix.  She-Ra and the Princesses of Power was developed by Noelle Stevenson, already well known for her Nimona and Lumberjanes comic series.  It focused on a teenaged Adora’s journey of love and friendship from being a Horde force captain to taking on the mantle of She-Ra, the savior of Etheria. This series ran a total of five seasons on Netflix to wide acclaim for both its storytelling and its inclusive characters and relationships.

I had heard good things about She-Ra and the Princess of Power since its launch, but being notoriously late to the game on Netflix shows, it took me until the fifth and final season was released to start my watch.  In all honesty, however, my timing couldn’t have been better.  I watched the entire run of the show in the early days of the coronavirus pandemic and was fairly awestruck.  It was amazing to see beloved, albeit sometimes one dimensional characters from the original series reborn with intentional stories and personalities all their own in bodies and with identities that reflect the varied and awesome realities of our world with a fantasy backdrop.  And then there’s the storytelling.  I have such appreciation for shows that are geared towards younger folks that don’t shy from complex stories and don’t pander to their intended audience.  Watching She-Ra and the Princesses of Power, I was moved to tears on more than one occasion and could imagine my younger self feeling all of the feelings when watching it.

One thing that really surprised me going from She-Ra: Princess of Power to She-Ra and the Princesses of Power was which characters became my favorite from each show.  In the original show, I was a huge fan of Adora/She-Ra but also loved the looks of Peekablue and Frosta.  In She-Ra and the Princesses of Power, I totally adored Mermista and, mostly surprisingly of all, became a diehard fan of Scorpia.  Both of those characters grow so much through the series, and with Scorpia, you just want her to win and find happiness.

Before we go on, I have to talk for a moment about music.  Both She-Ra series have memorable theme songs.  The original 80s theme is a riff on the He-Man and the Masters of the Universe theme with a voiceover from titular hero and a chorus of their name, though I find the She-Ra theme to be much catchier.   The theme for She-Ra and the Princesses of Power, however, takes catchy to a whole new level with the song “Warriors” performed by Aaliyah Rose.  It’s such a great anthem that’s guaranteed to get stuck in your head.

In addition to the original run of Mattel figures and their accompanying playsets upon which the show was launched, the 80s version of She-Ra had plenty of merchandise both then and now including t-shirts, coffee mugs and cups, sticker and coloring books, board games, backpacks and Funko Pops. Starting in the 2000s, Mattel began to cash in on toy collectors’ nostalgia with several series of reissued He-Man and She-Ra figure sets, beginning with Masters of the Universe Classics.  This first series ran from 2008 until 2016 and featured She-Ra characters scattered among those from He-Man throughout the line.  These were good looking collectors’ figures that were based on the original Masters of the Universe sculpts rather than the original She-Ra figures (so they were bulkier and all plastic with sculpted hair).  My own collection includes both Adora and She-Ra as well as Teela from Masters of the Universe. There have been several additional reissue series in the same vein of Masters of the Universe Classics over the years with a new one that just started (the She-Ra from that series was released in February, 2021) and a line of ReAction figures.  Like its predecessor, She-Ra and the Princesses of Power also has its share of cool merchandise including t-shirts, enamel pins, stickers, a line of books and graphic novels aimed at younger readers, and an awesome line of Target exclusive figures.

I had many of the original She-Ra figures growing up including She-Ra and a Crystal Swiftwind.  I remember always wanting the Crystal Castle playset, but alas, never actually had it (though my extensive Jem and the Holograms collection more than made up for that), but I do still have my childhood She-Ra coloring book.  I haven’t gotten any merchandise from the new show yet – save for the topic of our review, but I blame that on having watched it entirely during the pandemic and having not set foot in a Hot Topic in over a year as of this posting. 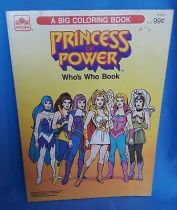 So let’s talk about what we’re going to review today — in 2019, Scholastic (who you may know from your childhood book fairs) released a chapter book designed for grades 1-5 called She-Ra: Origins of a Hero.  Written by Tracey West, this book kicked off an unconnected series of books for the same age group that took place in the world of the Netflix show.  The fourth book, released in early 2020, however was a graphic novel called She-Ra: Legend of the Fire Princess.  It was written by D.G. Gigi and illustrated by Pauline Ganucheau with input from Noelle Stevenson.  That graphic novel, which was a gift from Matt, is the subject of today’s review. As a reminder, here on Rotten Ink, we grade these comics on a star scale of 1 to 4 and are looking for how well the comics stay to the source material, its entertainment value and its art and story. So get ready for an adventure of friendship and wonder as we look at She-Ra: Legend of the Fire Princess

The Spirit Ember is the hot topic of the day as both the Horde and the Rebellion are seeking this lost rune stone.  As Entrapta and Catra plan their search, Glimmer tells the other princess of the legend of the Fire Princess, whose years of solitude trying to master the secrets of the Spirit Ember ended up destroying her kingdom.  Adora is disturbed by the legend, but soon her attention shifts as a Horde vehicle is reported outside Thaymor.  Queen Angela sends Adora, Glimmer and the others to investigate and permits them to search for the Spirit Ember. Meanwhile, Catra and Scorpia are on their own search, but are decidedly not on the same page about their objectives for the day.  As both teams race toward the Spirit Ember, it becomes clear that everything is not as it seems with the lost runestone and each team will have to not only decide if the rune stone is worth it, but also confront issues of trust and friendship along the way.

Comics based on cartoons (as opposed to cartoons based on comics) can really go either way: they can provide fans with additional stories that are faithful to the shows they love or they can utterly pale in comparison with the source material.  Lucky for us, She-Ra: Legend of the Fire Princess is the former. Just like the show, while this graphic novel is aimed at a younger audience, it’s a great read for fans of any age.  The story of a quest for a lost rune-stone would fit perfectly in the middle seasons of the show and, like all of the episodes, manages to balance the “quest of the day” with the larger things the characters are dealing with emotionally and interpersonally.  You can tell Noelle Stevenson had a hand in this because the tone is just right.  Gigi D.G.’s script is well-paced and gives each character time to shine, and Paulina Ganucheau’s art, which you can see below, fits perfectly with the style of the show.  Given that it is aimed at young readers, this will be a quick read for most, but it still manages to pack in a lot of story and a lot of heart.  If you’re a fan of the show and are craving more She-Ra content after the final season, definitely check this one out.

What a fun trip down the nearer and further stretches of memory lane.  When I proposed a She-Ra comic back in 2013, I had hoped that it would provide context and depth to the 80s characters.  Never could I have imagined a show as amazing as She-Ra and the Princesses of Power, and I’m so happy we have it.  For our next update, I’ll be handing the blog back to Matt, but we’ll stay in the world of nostalgia as we visit the 90s for a look at Malibu’s Prototype.  In the meantime, support your local comic shop, be strong and be brave.