In Cedar Rapids, Iowa on Channel 9 fans of late night horror films tuned into Saturday Nightmare and was treated to the antics of a goofy bolding vampire named Dr. Morbius and his show not only entertained but also inspired those who were the Monster Kids of the 80’s. One thing about the world of Horror Hosting is that it’s filled with many Doctors, Barons, and werewolves and of course Vampires! Dr. Morbius fits in both the vampire and doctor categories and is also a Horror Host that I don’t think gets the respect he deserves, so for this second update to the countdown to Thanksgiving I am very proud to present Horror Host Icon Dr. Morbius! Now I need to also say that this was a very hard Icon update to do cause sadly not much information is out their about Dr. Morbius and some that is out in the world conflicts with each other so what I have done is try my best to research him not only on the web but also talked to fans who grew up watching him during his run. So sit back and enjoy this wild zany ride of the bolding vampire Dr. Morbius.

Saturday Nightmare started out hostless in early 1986 and KCRG Channel 9 decided that when they launched the show they would also hold additions for a permit host and held auditions on August 26 1986 that had hopeful ghouls, ghosts and witches come out of the wood work to be considered for the host gig, this included Slime the Hosting hopeful we interviewed back on the Marvel Lifeform update. The audition tapes would air during a broadcast and by vote from fans the new host would be selected and while Slime might not have gotten the votes, Dr. Morbius did and became the shows permit host for the shows run from 1986-1988. Saturday Nightmare would show a single Horror or Sci-Fi film and would have the good Dr. hosting the film from inside his castle that he named Castle Mare, his shows opening theme was Toccata and Fugue in D Minor by Bach and his castle was lit with candles. Dr. Morbius himself is a vampire from Transylvania who moved to Iowa in order to get away and retire, and finds fun ways to pass the time by hosting Horror Films and teaching the viewers not to trust anyone besides their Doctor…meaning himself. His appearance was a long black cape with red lining, a button up white shirt, black pants, a thick mustache and sometimes his face would be painted green while other times it was flesh colored. His accent was thick and sounded like your typical impersonation of Count Dracula and helped add to the idea that Dr. Morbius was truly a vampire from that part of the world. While is time on air was short his iconic memory lives on for fans who grew up watching him and new ones who have watched his clips on Youtube.

Bruce Gantenbein aka Bruk Gant was the man behind the cape who was born in September 3, 1951 in Iowa and was always an entertainer at even in High School he played basketball and was the Captain his senior year in 1970. Bruce also was a singer and played the guitar for many bands and solo music projects of the years that include being members of Kelly And The Komb-Overs, Gambler, Last Chance and for solo work went by the names Bruk Gant and Big Bruce, music was his passion and by all accounts he was good at playing it. Besides music and being a Horror Host he also was a Stand-Up Comic and was a regular performer at Penguin’s Comedy Club in Cedar Rapids and tickled the funny bones of all that came to see him. Think about all the ways he entertained people he was a Horror Host, a Musician, a Basketball Player and a Comedian. Another interesting fact is that Bruce was an officer for Iowa City Police Department from 1978-1980 as well became a Campus Officer for University of Iowa and later a Security Officer for UI Department of Public Safety. Sadly on August 10, 2013 at the age of 61 Bruce “Dr. Morbius” Gantenbein passed away and the world lost a very talented entertainer. This update is dedicated to the memory of Bruce Gantenbein as well as his family, friends and fans who he has touched with his performances and friendship. 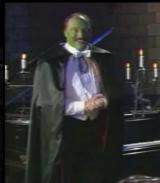 In 1986 Dr. Morbius alongside The Invisible Band teamed up with KCRG Channel 9 to releases a 45” Record that featured two rap songs written and sung by Morbius that sold for $2.75 via local shops and over the air orders. The first song was called “Morbius Rap” and was about how great the late night host was at showcasing cheesy films on his show Saturday Nightmare, you know the typical kind of song you would expect from a Horror Host! And on the flip side is a song called “Hawk Rap” that is a tribute to the Iowa Hawkeyes College Football Team and is equally filled with cheesy lyrics and a goofy beat, just think of the Chicago Bears Superbowl Shuffle song. Funny enough many Horror Hosts have tried their hands at Rap Music in the 80’s like Commander USA, Elvira Mistress of the Dark and Dr. Morbius! I can imagine that all through the late 80’s and early 90’s that Hawk Rap was played at the games as well as on local radio to amp up players and fans. The 45” is a collector’s item now but for those fans wanting to hear them they are both on Youtube, so make sure to check them out in all their glory!

On March 15, 2016 at Horrorhound Weekend Dr. Morbius was inducted into the Horror Host Hall Of Fame with the honor going to Baron Von Porkchop to induct him! As always we looked at this induction as an honor and Baron did lots of great research and delivered an amazing speech, sadly with Dr. Morbius being passed away he was not able to accept the plaque but I am sure he was looking down with a smile on his face. Before Baron’s induction speech they rolled a classic clip of Dr. Morbius and the crowd seemed to dig what they were watching, once more I would like to thank Halloween Jack and the HorrorHound Weekend for allowing Baron Von Porkchop to have the honor of inducting a classic and well loved Horror Host like Dr. Morbius! Below is some photos taken from the induction and showcases the plaque that was given in his honor. 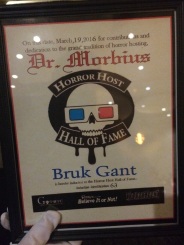 So we are now at the time of the Icon update that we take a look at the episodes I own of Dr. Morbius and break down not only the Movie (write up taken from IMDB) and the zany adventure of the host. I searched high and low for episodes of Saturday Nightmare I checked trade sites, download torrent sites, contacted fans and sadly was only able to come up with one episode for this update and for the one found I need to thank my brother Bryan for it as he was able to hook me up. So with that lets get our cheap vampire cape on and take a look at Dr. Morbius at work in this classic episode taken from it’s broadcast showing!

Host: Dr. Morbius is relaxing by fishing out his window and trying to catch whatever he can from the moat below, only to be pulled from his chair! Dr. Morbius then spends time making cheesy jokes and ushering back to the film or commercial breaks. Morbius then reads some fan mail and answers the questions his fans have for him. And closes the show with more jokes and tells us all that next weeks show will be Bride Of Frankenstein.

Movie: A scientific expedition searching for fossils along the Amazon River discovers a prehistoric Gill-Man in the legendary Black Lagoon. The explorers capture the mysterious creature, but it breaks free. The Gill-Man returns to kidnap the lovely Kay, fiancée of one in the expedition, with whom it has fallen in love. 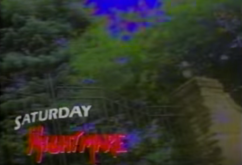 One thing I must point out is that Dr. Morbius and his show Saturday Nightmare loved them some Pizza Hut as almost every commercial break showcased that greasy pizza joint, or should I say Pizza Hut loved Dr. Morbius and paid for advertisement to air during it. This was a very fun episode and was a nice way to see just how Dr. Morbius hosted and now I understand why he entertained the masses of late night viewers in Iowa! While his time on air might have been short his fans still remember his late night hijinks and this was a true honor to pay him respect. But our next update will take us away from Horror Hosts and into the world of Greek Mythology as it has become a tradition for me to cover the one and only Hercules on Thanksgiving and this year we will be taking a look at the Marvel Comics Version! So make sure to visit back for that Holiday Update, so until next time Support your local Horror Host, read a comic or three and have a safe and fun lead up to our Holiday season.