In modern times many eyes have drifted from TV to computer screens as online viewing and streaming have became very popular ways for people to watch their favorite movies, shows and even Horror Hosts! Count Gore De Vol has been hosting his show online for many years now, and even recently Joe Bob Briggs returned to hosting and did so through streaming service Shutter and ended up crashing them as so many viewers tried to log in and watch! But for this update we are going to talk about a Horror Hostess who took YouTube by storm in 2007 with a unique show called Cryptique, and that host was the one and only Miko Macabre! Miko is one of those Horror Hostess you fall in love with upon first viewing as she has a charm and silly way of hosting that just draws you in and brings a smile to your face. So it’s with great honor and joy that I bring you Horror Host Icon: Miko Macabre. So sit back and enjoy this quick and fun Horror Host update. 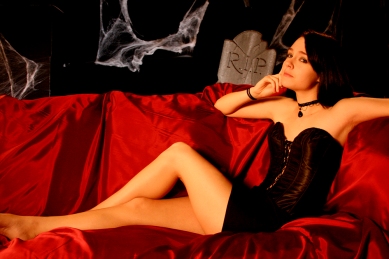 Cryptique started in 2007 with the first episode being a review of the 1980’s film Night Of The Demons in three parts. You see, this show is a Horror Hosted review show that had the host Miko Macabre breakdown classic and cheesy cult horror movies in very humorous fashion all the while making fun of not only the film, but herself as well. The show premiered on YouTube and became an instant hit with viewers as the humor and quirky nature of Miko made the show a must watch. The show was very fast paced and episodes lasted around 8-10 minutes each, and besides showing clips of the film that she talked and rift over she also would do skits that were silly in nature. One of my favorites is her reenactment of “Night Of The Demons” that had her saying “You Know” and then a slang term for sex…funny and silly stuff. The set was much like Elvira’s with a couch and spooky stuff all around. But as quickly as Cryptique started, it also ended as YouTube cracked down on content they felt did not meet their standards and Cyptique was caught in their judgmental crackdown ending the show’s run in 2009 and only having a total of 5 episodes. When the show ended, many of the viewers wanted Cryptique to comeback and still even in 2020 people want a return, showing that while the show did not last all that long, it did make an impact on viewers who loved the show and Miko Macabre became one of their favorite Horror Hostesses.

Miko Macabre is a young woman who has a super silly nature and uses her humor and sex appeal to entertain viewers as she made fun of the film that was selected for the episode. Miko was filled with bad jokes that range from cheesy to sleazy, and she had a way of delivery that is very funny and oddly welcoming. Miko is just a normal young lady who wears cute dresses and hosts from her set that is made up of candles, skulls, black walls and her red couch. And besides her humor and amazing good looks, another charm she had was the fact she was a host that made you feel like a friend and you were in on the jokes of the show. Actress Sophia Baxter, who also wrote the episodes, played Miko Macabre and rumor has it that she was doing this show while in college and once she graduated and YouTube put a target on Cryptique, she walked away from the project all together…or so Horror Host rumors go. While viewers’ time with Miko was short, she made her mark on Horror Hosting and has a huge cult following that makes her very important in the history books of Hostesses and while she might never get into the Horror Host Hall Of Fame, this fan thinks she should! 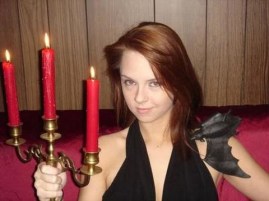 So we are now at the part of this Horror Host Icon update where I will break down the episodes I have on DVD, and sadly I do not have all of her episodes as YouTube took many of them down. I will do my best to write slightly about the movies she covered and will talk about her segments as a whole. So if you’re ready, let’s spend a little time with the one and only Miko.

Host: Miko Macabre gives the history of the show and how and why they got kicked off Public Access and then hosts and reenacts scenes from the film Night of The Demons, and even shows footage of her dancing after being demon possessed. In the next episode we meet the show’s intern Andrew and as Miko breaks down the film Basketcase and Miko shares a fake story of her having a conjoined twin and later must “pay” the prop man with “favors”! The final episode Miko is reading from the book of the dead and starts her review of Army Of Darkness and even plays a little game show with Ash from the film! Miko also shows how she would deal with mini versions of herself.

Movie: Clips from such films as “Night Of The Demons”, “Basket Case” and “Army Of Darkness” are shown in these reviews.

Note From Matt: Sadly the episodes on here are all that’s left of this show once YouTube targeted them and removed the episodes and the official website has long been down, leaving some three part episodes unfinished on this DVD.

While Miko Macabre is not as iconic as Horror Hostess like Elvira, Vampira, Stella Desire, Rhonda Shear, Penny Dreadful, Marlena Midnite or Misty Brew, she has carved her place in history as being one of the best even if she only lasted for a very short time. Her fan base is still loyal even to this day and her viewers still hope for a comeback that is long overdue. So I hope you enjoyed this quick Horror Host Icon update as Miko has been on my list to cover since I started these Horror Host updates and it was a real blast to the past to write this and share the glory that is Miko with you readers. If you have interest in Cryptique and Miko, make sure to look her up on YouTube and give her episodes a watch. For the next update, we are leaving Miko and Cryptique behind and heading to space to take a wild ride with Morlock 2001 from Atlas Comics. So until next time read a comic or three, watch a movie or two and as always support your local Horror Host! See you next update for a spacey good time!